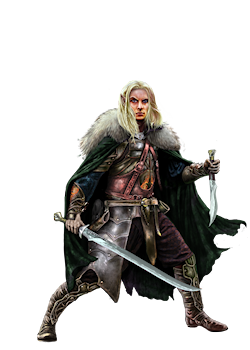 Rohk was a young elf attending the Academy of Magic, embracing his mystical heritage when he encountered a chameleon. The chameleon, that tended to take on earth tones and ruddy hues when changing colour, became a familiar for him. At night, after the arcane studies of the day were done, the Chameleon would whisper to Rohk, telling him arcane secrets beyond his wildest dreams. In time, the Chameleon was able to communicate with Rohk telepathically.

Several years passed and eventually Rohk mastered the power of rune magic. With those skills in hand, he attempted some of the rituals that the Chameleon had taught him. No sooner had he tried the first incantation, and then he was transported to a land of fire, pain and torment. There, he saw a large demon with red skin, black eyes, horns, and wings. Black armour protected his form and many precious rings adorned his claws. He introduces himself as a prince of the Infernal Realms. The demon spoke to Rohk in a language he had not heard before but somehow, Rohk understood. The voice of the demon was familiar; it was that of the Chameleon. In exchange for giving Rohk the arcane secrets and knowledge of forbidden magicks, the demon prince would accompany Rohk throughout the land in the form of the Chameleon to scout the world for potential threats that might befall the demon prince’s realm. Rohk accepted the bargain but was wary. He did not trust that the demon prince would not try to manipulate him or try to enter Illyria and conquer it for his own. To that end, Rohk sought to learn the forbidden magicks while secretly establishing an empire and alliances to oppose the demon prince should he ever try to enter Illyria as well as preparing the other inhabitants for the possible dark future ahead...

Over time, using the forbidden magicks taught to him by the demon has turned his skin from a pale green to a pale red. As well, the new skin has toughened up to become like soft scales. If observed without his hooded cloak, you can see two tiny nubs starting to develop from his skull. He once thought of avoiding public view, isolating himself and fixing his appearance but now none of his spells can hide the dark influence of the forbidden magicks. He now maintains a cloaked persona, one of mystery and of shadow while he continues his vital and secret mission.