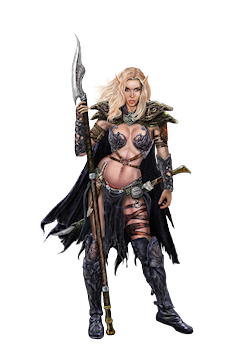 I do a bit of trading, so mail me if you have something to offer!

At the start of everything there was light. And the light was understanding. And the light was love. And the light was growth. For all these things are life, and life began with life.
And the first life yearned to begat life; and life grows, by its nature. And so she made herself many; and so he made himself many. Forms were imagined, and they were distinct; and as they were distinct, they needed names, which they also imagined.
And so these many lives, these imaginers, these Lightened, our gods, they understood, and loved, and grew. And they yearned to make what was not of themselves, but which they could love, and which could grow, illuminated by their wisdom. And so they created their First Daughter.
But the First Daughter was most terribly flawed. She was not of the same nature as the Lightened, of our gods. They did not touch her as they made her, but only willed her to be, as one might dream a thing but not set one's hand to its creation. She was made by them from filth and mud, of base and decaying things. And she was cruel, and angry, and sought not to understand or to love or to grow, but delighted in cruelty and ignorance.
So the Lightened made the Second Daughter, made from air and fire, and into her they breathed their breath. But the Second Daughter had no constancy, but was ever-changing like the winds, inconstant as fire, prone to fitful moods, and without love for those who had created her.
So the Lightened made the Third Daughter. She was made from solid stuff, from stone and clay and iron and ice. And as they made her, they touched her with their forms, that she should know their power. And she had understanding. But she had not love. And as she had not love, her understanding was cold, and barren, like iron or ice. She could calculate and plan, but not care nor feel.
And at this the Lightened despaired, and they wept, and they yearned for a daughter who might be worthy of their hopes. And they drew down the light of the stars, and formed from that a final daughter, and their tears fell upon her, and in their tears fell all their yearning and their love and their regret for their mistakes and their hopes for all that she might be. And when this last daughter stood before them, they proclaimed "This is a worthy daughter!"

Elves are the most magically powerful beings to ever walk the mortal realms. Only true descendants of the Favoured Daughter of Starlight, Mother of all Elves, can wield the awesome power of Elven magic.

Out of the mysterious forests comes the Elven archers. Unencumbered by helm or heavy armor, Elven archers are keen of eye and fleet of foot. These elite bowsmen are unmatched in their use of the bow, and are swift to let loose a rain of arrows upon any foe.